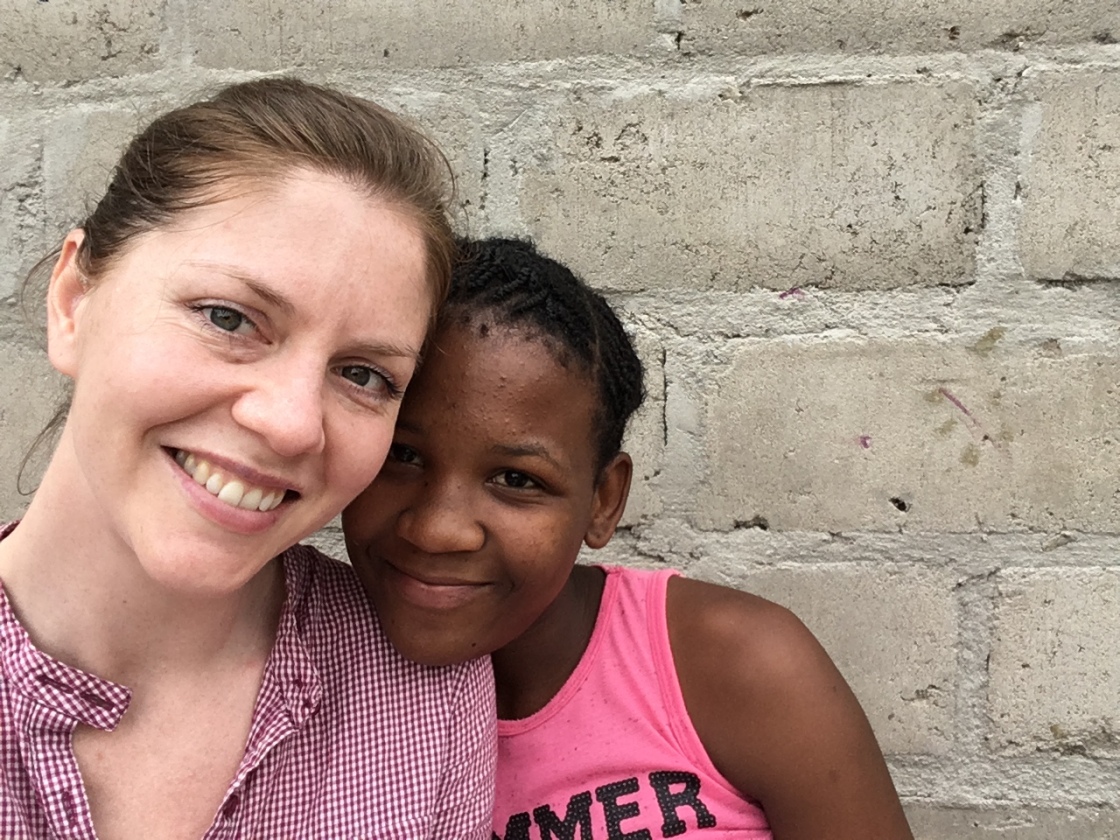 It has taken me a little while to feel ready to write this story as it is another emotional one for me and it just didn’t feel possible to churn these stories out quickly.  I met up with a friend the other day who I haven’t yet seen since being home and it was actually really hard to open up the gate again to the stories and emotions I came away with.  When asked what the hardest part of the trip was I had to choke down my bubble of emotion as I spoke because I don’t find it easy to cry in front of people.  Thankfully for you lot I don’t mind writing it down so much!

I met Sarah at the end of our very first day in the community.  She caught my eye as we were leaving because she was cool, sassy and beautiful.  I couldn’t help but be intrigued by her and her group of friends as most of the children I had so far met were under the age of 10 but here was a little group of trendster teenagers!  When I caught her eye she gave me a confident smirk and cocked an eyebrow at me which clearly said “and what are you looking at?”  However, I am no longer a teenager who can be intimidated by the cool girls so I just went straight over to them and introduced myself!  She seemed a little taken aback and unsure of what to make of me.  I struck up conversation with her friend about their beautiful plaited hair and she told me how she did their hairstyles herself which I was really impressed by as it looked really skilled work.  Despite Sarah’s uncertainty of me muscling in on her group she couldn’t help but giggle shyly as I praised her beautiful hair.  Honestly, I think she just didn’t seem to know what to think of this white woman who wanted to chat hairdos in the pouring rain (yes that’s right, it was rainy season when we were there!).  However, the conversation evolved and we got to exchanging names and talking about how old they were and how they were getting on at school.  I didn’t have long though as our team had already boarded our minibus to return back to the hub but I left with a promise in my heart to investigate this young woman I felt so intrigued by the next day.

I just couldn’t shake off the feeling that the reason she was so unsure of me was because I singled her out and gave her attention.  One of the things Charlotte (from my last blog) had loved was to read me her homework and show me how well she was doing at school.  When I found out that both her parents had died I realised that Charlotte didn’t have anyone to praise her at the end of a school day or be filled with pride at how many ticks she got in her book that day.  Attention was vital to her and rightly so.  Getting too much attention as many of us will know can be a bad thing but for these children it is in fact something that they are starved of and letting them know that you see them, that you really see them, is a big part of what you are there to do.  To let them know that their life matters, that you care about them and that they are just as important as anyone of us.  I was reading yesterday Psalm 72 and the end talks about how God promises to redeem the oppressed and poor because: “their lives are PRECIOUS in His sight”

That for me became my main purpose during our trip, to let them know that they are precious in His sight and also in my sight.

When Sarah and her group of friends arrived at the Care Point the next day it was to find us all dancing around with the younger kids (who get out of school earlier) chasing little rainbow balls through the air as we had got out a whole load of bubbles to play with which delighted them all and created an air of magic.  The kids all ran around madly chasing after them, trying to catch them and it was a happy and easy time spent together!  She had a half puzzled smile on her face as she watched on and I couldn’t help but feel that Sarah wanted to join in and play, wanted to get to know the new uncool white lady, but her teenager status just wouldn’t quite allow her, not yet anyway.

We then got out some pens and paper which created even more excitement and the kids grabbed at as many sheets and pens as they could get hold of and then set up camp in the church to start drawing.  Even the older kids were straight in there to get the colours and paper.  The atmosphere in the church was electric, everyone was so alive and so excited.  Voices were chattering delightedly and there were squeals of laughter and tussles over swapping pens and kids dashing around to see if there were any extra sheets that might have drifted into the corners.

When I went over to Sarah and her friends it was to much delighted giggles and excitement.  They were already elbow deep in pictures and colours and this simple activity seemed to naturally break down the teenage façade and created a sudden ease.  Sarah and I ended up sitting next to each other and she was drawing a really beautiful picture and I was startled by her talent.  It would be very easy to think that kids living in poverty and who don’t have the same opportunities as us aren’t as bright or as gifted but my experience is that these kids are very talented and intelligent with huge potential.  This is part of where your emotions get caught up in what you are seeing because you know that the likelihood is that they wont get to reach those potentials.  If you asked anyone of the girls we met what they wanted to be when they grew up they all said “Police”, no matter how old they were, including Sarah.   When I first heard this I thought it sounded like a positive career choice but one of the ladies who works for Hands At Work explained to me that this is the one of the only opportunities for girls living these communities.  So in fact it isn’t an opportunity because they aren’t choosing it, it is choosing them and because they want to raise their families out of poverty so badly they are willing to do anything that will help them. 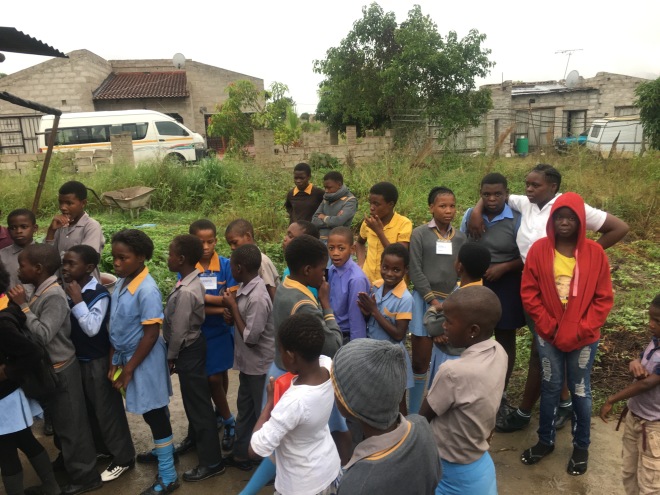 But don’t we all deserve the choice that we have in the UK?  Don’t we all deserve to dream of what we will one day be?  My daughter decided four years ago that she wants to be the toothfairy when she grows up and at the age of 8 she is still completely committed to this career choice!  She is growing up in a world where she can pick and choose and as her parents we will do our utmost to see those dreams come true.  Even her dream of toothfairy stardom is kept alive as “The Toothfairy” writes her letters every time a new tooth falls out.

As I watched Sarah drawing a girl with long luscious locks and a long amazingly detailed dress I yearned to tell her what an amazing fashion designer she would be but I wasn’t sure if that would help her to reach out of the box she was trapped in or whether it would make her feel even more trapped by her circumstances.  In that moment I felt like I let her down by my inability to guide or steer her in anyway.  Of course I praised her work which she accepted shyly but with a hidden grin but I wished I had known what more to do, what more to say.  Instead I made her a card and inside wrote a message of encouragement and friendship which thankfully managed to bridge the gap.  When I gave it to her she actually double checked that it was for her, as if I had given her a precious gift of pearls.  No more was the shy smile hidden, but an open and delighted grin beamed from her face.  She gave me that beautiful picture she drew that day in return, with my name written on it and called me “friend” and, despite my lack of wisdom, drawing and sharing pictures side by side brought us close. 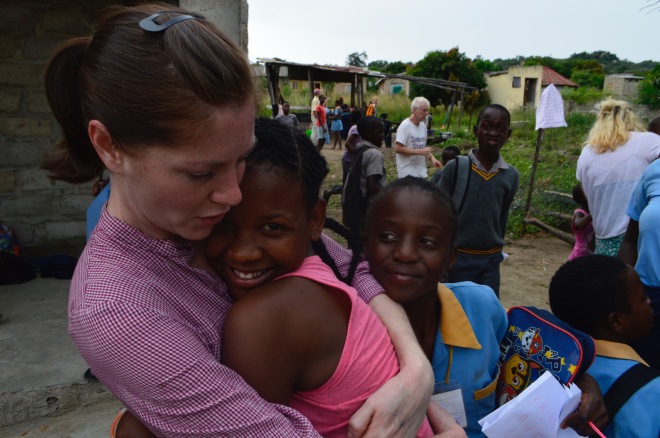 As it was time for us to go the kids all piled out onto the church front steps to wave us off.  I happened to be sat in the front of the van and as we drove away Sarah made her way to the very front of all the other children and started blowing kisses to me.  There I was wanting to spend the day making her feel precious and yet as the day ended I was the one being treated as the precious one.

A few days later I had the opportunity to visit Sarah’s home and meet her mum and her other siblings, which leads me onto telling you about two other relationships that I made with two other amazing women.