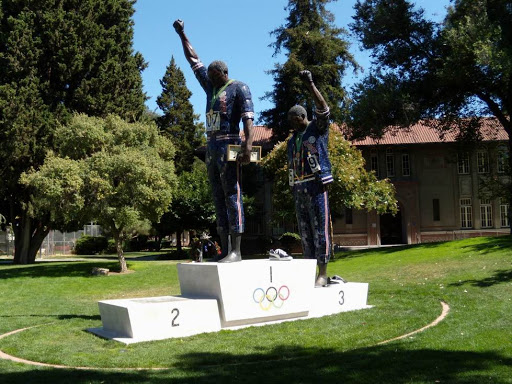 Will you stand in the gap?

I love this photo.  In fact, I don’t love the photo so much as I love the statue.  The moment that brought this statue into being took place at the 1968 Olympics when John Carlos, Tommie Smith and Peter Norman stood together on the Olympic podium in unity to fight against racial discrimination.

It is only recently that the story of the white man in the photo, Peter Norman, has come to light.

Peter Norman was an Australian record holding 200m runner.  He ran in the 200m race at the 1968 Olypmics and placed second along with  Tommie Smith and John Carlos who took gold and bronze.

Before the three champions collected their medals at the podium, Peter asked Tommie and John if he could wear one of their Olympic Project for Human Rights badges.  Tommie and John were both part of the organisation and wore the badges, along with other olympians, to show their support of ending racial discrimination in America and also in sports.  The three athlete’s together took the podium wearing their badges with both Tommie and John raising a black-gloved hand in the air.  This moment defined all three mens lives.  Tommie and John were both banned from the next games but came back from it to rise up as great human rights activists for black lives.  Peter was not banned but he was never again picked for the Australian team despite qualifying.  Whilst Peter’s running career was over, the Olympic committee still treated his act of defiance differently to those of his friends in a clear act of discrimination by choosing to “punish” these black athletes differently to their white comrade.

To commemorate this history making moment a statue was erected of Tommie Smith and John Carlos standing on the gold and bronze podium steps that day, arms raised, badges on.  However Peter Norman’s spot was left empty.

When I first read about Peter Norman and this statue I felt so sad that he wasn’t included, as if what he had done had been forgotten.  He may not have suffered racial discrimination as Tommie and John would have done, but he gave his career to stand with them.  However, on reading more I learned that Peter chose to have his space to be left empty.  He wanted anyone who visited the statue to have the opportunity to stand in the space, as he did, and show their support for black lives.

I felt so ashamed of my own initial thoughts when I found this out.  My heart had been set on fairness and him receiving equal recognition for his stand against discrimination.  His heart was set only on the cause for black lives.  He didn’t need a statue to commemorate his moment of support and this is why I love this statue so much and why I think Peter’s story is so powerful.

Peter Norman taught me, a white woman who supports the black lives matter movement and the fight against racial discrimination, to see that it is not about our names as white supporters. This movement is so much bigger than that. Funnily enough the bible says the same thing.  It is not about our name or our fame.  It is about God’s name and His glory.  It is about acknowledging with humility that He is our higher power and if we do or achieve anything it is for Him and it is because of Him.  He is bigger than all of us.  So we must show Him the humility and respect He deserves.  In the same way. as white people, we need to show the black lives matter movement the humility and respect it deserves.  Peter Norman was a Christian and I think the way he acted and conducted himself speaks volumes for his beliefs.

Right now as the black lives matters movement takes off and as white people we want to unite and stand alongside, let us remember that it is not about shouting as loudly as we can.  It is not about making ourselves feel better about our white privilege and trying to convince anyone who will listen that we are decent human beings because we support this cause.  It is not about people knowing our names.  It is about standing alongside the black community, respectfully and honourably and with humility, whilst we give them the opportunity to raise their black-gloved hands in the air.  Wear your badge, step up and stand, but remember it’s their voices that we need to be listening to, not our own.  Peter Norman didn’t raise his fist in the air with Tommie and John that day because I think he already understood this.

So the question we need to ask ourselves today is:

Will we stand in the gap like Peter did?