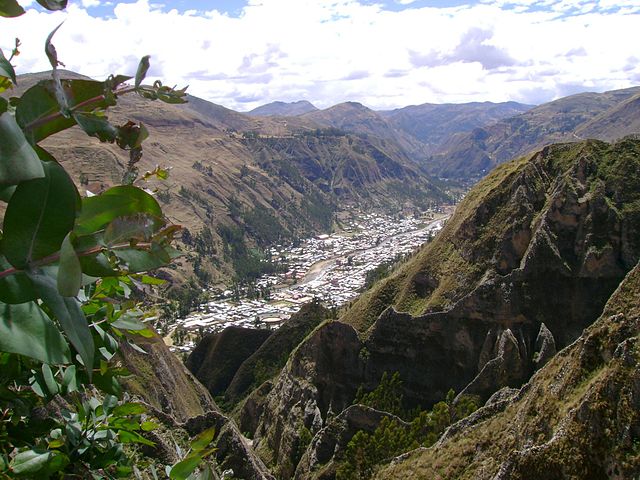 Yuri’s story can be found early on in Gary Lauren’s “The Locust Effect”.  It is sadly not one of the success stories that you can read about on IJM’s website of a child rescued from dark oppression.  Yuri’s story is one that shows the bare truth of the injustice we live with in this world.  There is no Hollywood ending for Yuri, no last minute fairytale romance.  Her story shows the dirty truth that the world regards poor people as lesser beings than the rest of us and that if you are treated like nothing for long enough then you will begin to believe it.

One day something very special happened in a place called La Unión  (a village in the region of Huánuco, Peru)-a class of six graders graduated from primary school.  Now for us this is a normal yearly occurrence: you start a school year, you complete a school year and then you move onto the next-simple.  But in a place like La Unión this was a very special moment and something to be celebrated.  Jhon, one of the 6th graders, came from a very poor family, so poor that his mother worked many hundreds of miles away to earn money to send home to make it possible for Jhon to go to school.  To make it possible for his mother Lucila to do this, Jhon and his sister Yuri lived with relatives in La Unión where their mother hoped they would be kept safe from harm.

On the day of the graduation there was a big celebration and one so special that Lucila saved every extra last penny that she could to provide Jhon with a suit for the occasion. Apparently he would get it out of its wrapping each night to look at it and marvel at this special and precious gift.  We had a wedding to go to last year and so one Saturday afternoon I “popped” into Monsoon, picked up a suit for my son and party shoes for my flower-girl-to-be daughter and then whisked out, onto my next task.  It may have been a special occasion but the buying of these items, whilst enjoyable, was not a major moment in my life-I fitted it round a trip to John Lewis and lunch at Prét.  And then, when it came to it, my son, rather than marvelling at this precious gift I had bestowed upon him, had a major meltdown about having to wearing a shirt which he apparently “hated”.

The celebratory party was held in a hall in the town and everyone went.  All the families and their friends turned up.  There was party music and a hog roast and upstairs, above the hall, the family that owned the hall were selling cheap toys to parents as gifts for their children.  The children were all present, playing with their friends and running up and down the stairs between the two floors, enjoying themselves and joining in the celebrations, which went on late into the night.  Yuri was one of these children.

Despite the merriments and jovialities of the party, the next morning Jhon was awoken early by someone beating on the door and yelling that someone had killed his sister.  Jhon and his family rushed from their home and through the streets to where a crowd was forming around the body of an 8 year old girl, lying tossed in the street in a pool of blood.  Her feet were tied with cable wire, her legs were broken at the knees, her little skull had been crushed in and her knickers had been left pulled down around her ankles.  Her broken body lay just outside the hall where the party had taken place for everyone to see-no one had even tried to hide this crime.

The police were phoned and when they came to collect Yuri’s body, even though the family told them that the last place Yuri had been seen alive was in the hall, they left without going in or asking the Alayas any questions.  Confused and dismayed the family and townsmen rushed into the hall and went upstairs.  When they got there they found a blood stained mattress, Yuri’s blood stained clothes and also a mans shirt soaked in blood.  Can you imagine the horror of finding a scene such as this and knowing full well that it was the setting of your niece or sisters rape and murder? And not being able to get the police to come and look at it?  I can’t make my brain even process the trauma and the helplessness those people must have felt.

The police, some time later, did return to the hall and brought in a boy of 11 for questioning.  The boy was called Jerardo and he worked for the Alayas in return for food and board.  Jerardo told the police what he knew which was that he had fallen asleep in the hall and in the middle of the night he was woken up by a girl crying out for her mummy.  He went upstairs to see who it was and found a little girl covered up by a blanket and Pedro Alaya lying drunk next to her.  Pedro shouted at Jerardo to go and start cleaning up downstairs but when Jerardo later went back upstairs the girl had gone.  After hearing this the police went back to the hall and found the evidence the family and friends had seen earlier.  At this point in the story I began to feel hopeful.  The discovery of such blatant and graphic evidence by the police-what could possibly go wrong?  Yet the next few pages of the book made me feel sick and confused, completely and utterly overwhelmed by how a clearly open and shut case could yield no justice.  I also felt so embarrassingly naive and uniformed.  When I think of Peru I get excited about the Inca’s and all the incredible places there which,  as a tourist, I would love to visit and experience.  Those of us who have travelled a bit refer to ourselves as “well travelled” with an air of self importance and pride.  We’ve seen a thing or two, we know what the world is like.  But we don’t.  I don’t and it scares me.

The next few stages of this story are going to shock and probably horrify you.  Please keep reading though as they very firmly make the point that Gary Laugen and IJM so desperately want us to understand: in the developing world poor people are treated like nobodies and rich people are treated like kings.  It’s as black and white as that.  Justice is not the administration of the law, justice is a commodity and if the price is right then it’s yours to be had.

Yuri’s body was taken for a post mortem and appropriate DNA tests were taken and the presence of semen was found.  However during the post mortem, by Peruvian law, a family member is allowed to be present.  In Yuri’s case the prosecutor did not allow this but he did allow for the Alayas lawyer to be present (the Alayas at this point had not even been accused of anything but their lawyer was present for the post mortem, yet not the legally approved family member).  However the doctor who took these samples later revealed that the Director of the hospital had ordered him to destroy the samples.  Later that same day, after Yuri’s body been released to the family and cleaned for burial, this same doctor was ordered to go to Yuri’s home and during her wake, take new vaginal samples.  Even later that day, the Alayas lawyer turned up at Yuri’s home bringing with him two policemen and two medical professionals whom he made take more samples.  He at this point he told the family that he was in fact THEIR lawyer and he would do everything he could to bring justice about for Yuri.  He said it was vital that he have Yuri’s clothes.  Bewildered, frightened and desperately hoping for someone to help them, the family conceded and gave him the clothes.  These clothes were not only not entered as evidence but they too were destroyed.

As for the mattress (a large blood soaked mattress), the police gave this to the prosecutor who did not enter it as evidence or have it examined in any way.  After the case had been closed, human rights lawyers who were making further investigations into the case, found the mattress hidden away in a cupboard in the prosecutors office.  Not only that but when they found it the blood stained section had been cut out and the mattress had been sewn back together.  A picture exists of the mattress before the police took it, it had 8 stripes across it.  When it was found it had 4 and was half the width it had been originally.  The prosecutor, lawyer and director of the hospital had succeeded in erasing every shred of evidence.

The police in all their wisdom then decided to arrest and charge a local town drunk with Yuri’s rape and murder.  The people of La Unión nkew this man and knew him to be harmless and innocent and they raced to the police station protesting the arrest.  As quickly as he had been arrested he was released.  Next the police found a local boy of 19, Jose, who was believed to have learning difficulties, brought him in and charged him.  At the time of the murder Jose was 3 hours bus journey away in a completely different part of Peru.  He testified that the police stripped him naked, choked him, violated him and tortured him for two days.  The police then also picked up Jerardo again, knowing that his testimony implicated the Alayas, and also tortured him until he admitted to raping and murdering Yuri with Jose.

At trial both Jose and Jerardo recanted their statements and said they were made under duress but by that point it was too late.  Jose was given a 30 year sentence, which he is still serving,  Jerardo however was too young for sentencing.  To try and right this wrong Yuri’s mother Lucila and her family sold everything they had including a small plot of land, to try and appeal.  The new lawyers took their money but did nothing so Lucila and her family not only lost their beautiful little girl, but they also lost everything they had trying to seek justice for her.

If this story has touched you and you would like to make a difference in the area of sexual violence then here are a couple of links to learn more about poverty in Peru and donate to their causes if you would like:

Save The Children Peru

(I found the image of the child above at https://borgenproject.org/5-things-learned-poverty-peru/)