Need To Spend A Penny? Or Do You Prefer To Powder Your Nose?

Spend a penny, powder your nose, answer a call of nature, or maybe you prefer to take a tinkle?!

It only just occurred to me that the reason we have so many euphemisms for going to the loo (and believe me Wiktionary can provide you with a lot more!) is because we have access to loos so easily. Going to the toilet is not an unusual act!  We all have toilets in our homes and if we are out and about then there is normally somewhere to go. Occasionally you might get caught short but more often than not this is the exception not the rule.

But for millions of people out there a toilet is not something they are familiar with and even more concerning is the lack of their understanding as to why clean sanitation is so necessary.

When I visited Nepal a number of years ago I stayed at the local Pharmacists house and he was considered to be a man of importance and relative wealth in the community and to show that he had an indoor loo. However, for what it was it might as well have been outside in the garden!  Located on the ground it was a mere hole in the ground and lying on the floor next to it was a stick that had been pulled off a tree from outside-this was the “flush”!  It was neither pleasant nor sanitary but they considered themselves lucky.

This is where Toilet Twinning comes in!

Toilet Twinning is an organisation set up by Tearfund to enable us to sponsor (or “twin”) a toilet in the developing world. The cost of this donation is £60 which in comparison to some giving sites out there seems a little steep and Toilet Twinning often get asked about the cost and so there is a section on their website explaining exactly why it costs £60 and the answer in my opinion is an incredibly good one.

Often charities and organisations offering help and support can swoop in and just do what needs doing, and then leave, without actually fixing the integral problems, just the surface ones.  However, Toilet Twinning recognises the importance of people and communities having the opportunity to make choices/changes for themselves and then implement these changes.

So the way in which they work is to go into the communities and build relationships and trust with the local people. They do this by putting on workshops about farming and agriculture and then form small action groups and encourage participation in these groups to teach the idea that change is possible and there are always new ways to do things. They also encourage the women to speak up and participate in these groups as women are often the main carer in the home yet they aren’t allowed to voice an opinion.  This too teaches the men to value female input.

At this point the idea of health and sanitation is gently and sensitively brought in and committees are formed to look at and understand these issues.  Most locals will not understand that poor sanitation is the reason for most of their ailments and illnesses.  Once this understanding comes and they appreciate the importance of toilets they themselves can then decide to build them.  Families will build the latrines themselves rather than have the charity hand it out to them-its a dignified way in which they can make their own choices.

When it comes to areas where there is conflict, Toilet Twinning will go in and provide the materials and the man power to build toilet facilities as these are obviously countries where awareness groups and building local relationships will be much more difficult. When they build these toilets the cost to the charity is far more than £60 a toilet and so between the awareness groups/teaching and the hands on building in conflict areas, the average toilet comes out at £60.

If you don’t feel able to commit to a donation of this size why not encourage your place of work to twin their work toilet with one in the developing world?  Or fundraise as part of a team?  You receive a certicate to frame and put in your own bathroom! 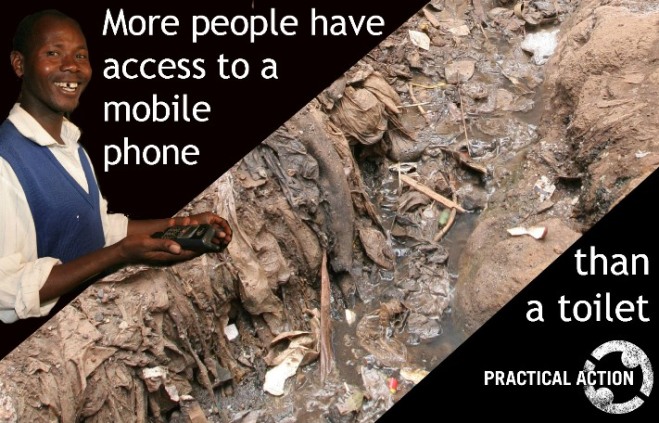 Let’s make the world we live in one that values toilets more than mobile phones.