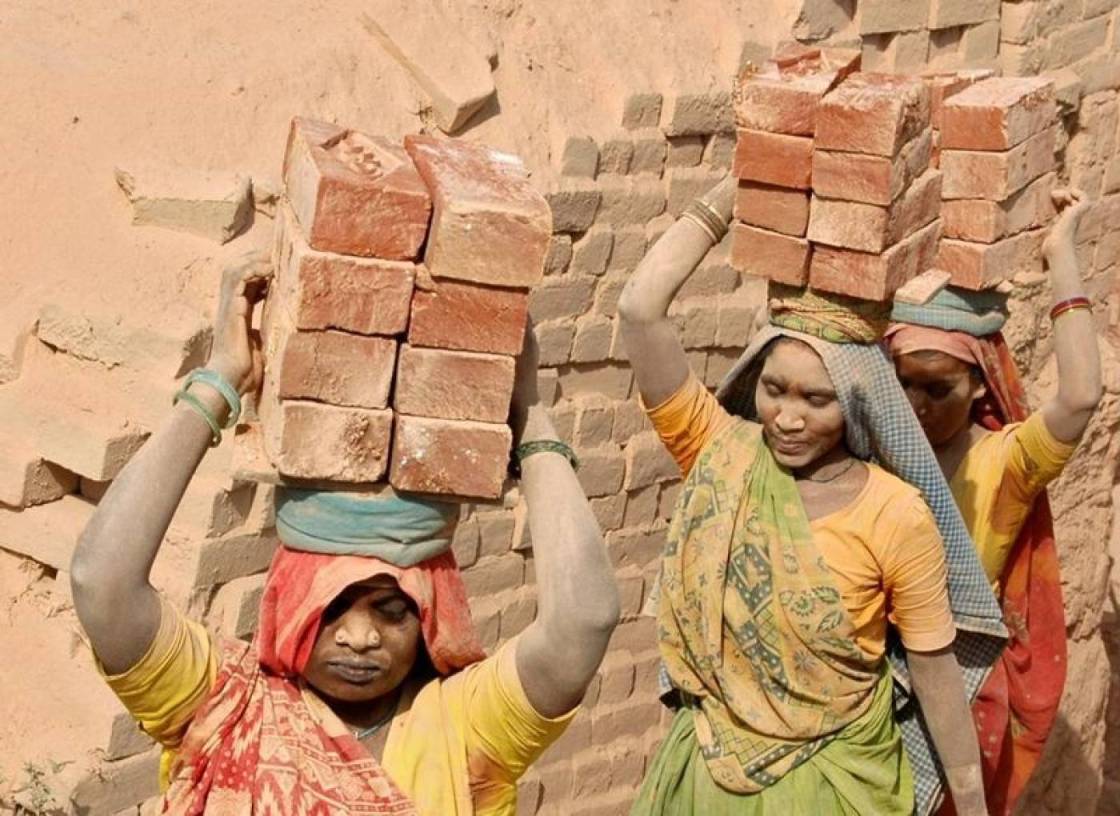 The House That Mariamma Built

Marimma, her husband and their friends used to work in a brick kiln factory.  This meant 12 hour shifts of squatting to mould the bricks and lay them out to dry and then carry up to 70lbs of bricks on their heads for distances of up to 100 yards.  Both men and women alike bore this gruelling and back breaking work day in, day out.  They considered this to be a good and honest way of making a living for people of their “low caste” birth.  Too poor to go to school and receive an education this was the only kind of work available to them to help them provide for their families.  Whilst living at the factory they had the freedom to come and go as they chose outside of their working hours and they had the freedom to plan and save for greater dreams.  They were able to visit family and friends and send their children to school.  It was considered a good life.  They had one day off a week on Sunday which Mariamma tells Steve Haugen CEO of International Justice Mission, was a day when the women would take a bath and beautify themselves.  It was their day to feel beautiful. 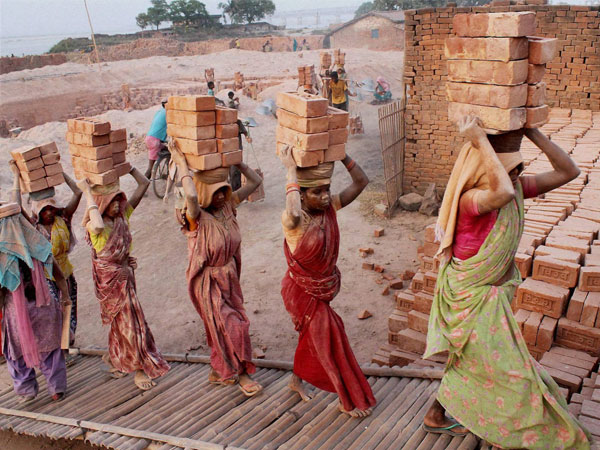 However, they began to run out of space in the factory they were working in.  They were paid for every 1000 bricks they made and they were running out of floor space for moulding and drying which was limiting how many bricks they could make.  A man came to see them one day who said he had a factory where they could work and he gave them a $333 cash advance.  This man for legal reasons will be referred to as Mr V.  and the seven  friends accepted the cash advance and moved to the new factory.  However, when they arrived they discovered that they were not allowed to leave the factory and when not working, they were kept prisoners in a cell.  Mr V told them that due to the cash advance he had given them that they now owed him money and needed to work for him until they had paid of their debt.  What little he paid them was just enough to feed themselves and the food they ate they had to buy off him.  However, Mr V some days chose not to pay them anything and some days he did not provide them with any materials to work with so on these days they could not work, earn or eat.  Sometimes he left them as long as seven days without food or work materials, locked up and starving.  Some days he would arrive with his men and choose on of the workers from the group and have them beaten all night long and then threaten to do the same to anyone who tried to escape.

Mariamma and her husband had left their children with Mariamma’s mother and when word got to them that one of their children was critically ill they decided to sneak away to be with their children.  Unfortunately though Mr V found them and brought them back.  When they got back to the factory they tied Mariamma’s husband to a tree and beat him with clubs.  He was begging for them to stop and so was Mariamma but as she cried out Mr V’s son grabbed her and dragged her to a room next door where he and Mr V both raped her and threatened to kill her.

The sexual abuse that then ensued became a horror that would haunt them all each night.  Mr V would arrive with his son and tie all of the men up and then take all of the women, including a 12 year old girl, to one of his construction sites and rape them.  These nights they were often joined by Mr V’s men who would join in the gang rapes.  This happened repeatedly and each night the women would sit in terror wondering whether they would come for them that night or not.  As a group they decided that they would most likely die at the hands of Mr V and so they might as well try and escape.  The seven of them managed to get away and thankfully for them Mr V couldn’t find them, however he dealt with the problem by kidnapping three men that the group knew.  He had them beaten with hockey clubs, to the limbs but also to the joints as well, for three full days, after which they took them to the factory to work but where the beatings continued.  After being kept prisoner for a week Mr V let one of the men go and told him to find the runaways and tell them that if they did not come back he would kill all three kidnapped men.  Mr V’s instructions were for this particular man to make a public announcement of this, to all the other people living in that area.  This is how unafraid of the law enforcement he was, that he could make public threats of murder and not worry about the consequences.  So they all returned to Mr V’s factory to save the other men and accepted that they would most likely die that day.  However, by the grace of God that day International Justice Mission who knew about the kiln factory and had been working tirelessly to try and get in to rescue the prisoners, arrived with the district magistrate to search Mr V’s premises.  They found in a locked cell the workers that he had been keeping as slaves and the kidnapped men who had been so badly beaten.  That day on the premises they all gave their corroborating testimonies on film to the magistrate about what had happened to them.

Mr V had committed 35 serious crimes in this case and yet no charges were brought against him for another two years.  Despite the evidence they had against Mr V the police faltered every step of the way to bring the charges around, which meant that Mr V remained a free man on the streets of Bangalore to continue treating other people in the same way.  The police gave a long list of reasons for the delay, which included the fact that the raped women had not received medical examinations at the time of the rapes (even though they were being held prisoner by the rapist and under Indian law this is not required in such a case) and because the victims did not present themselves at the police station, even though they did repeatedly go the police station and the police refused to take their statements over a period of a year.  They also listed as a reason the fact that a father and son would never commit an act of rape together and that the rapes could not possibly have taken place with anyone else around.  There were countless other false and unlawful reasons for why it took them two years to charge Mr V all of which are horrendous and make you want to scream as you hear about them.  However, after these two years of the victims and IJM wearing the police down with their persistence in this case they did charge him, yet he was instantly released on bail.  Then the government “lost” all the evidence that had been taken on the day of the raid.  All of the items used to beat the victims with and other evidence of the imprisonment, as well as the videos taken of the victims giving their testimonies to the district magistrate.  The police did not even log that the videos had come into their possession when IJM submitted them and so there was no record of them at all. 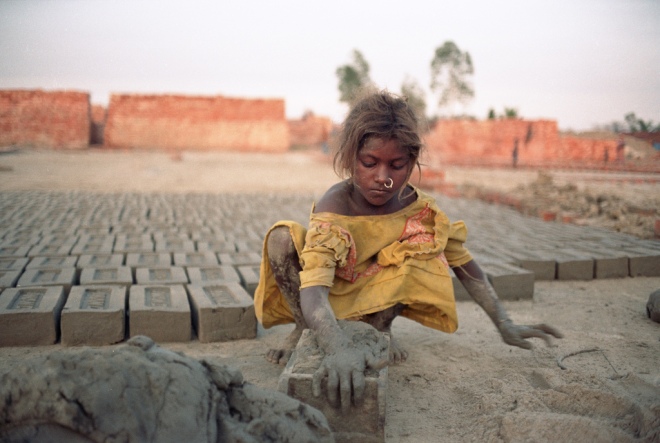 At the trial the district magistrate gave his testimony of what he had witnessed that day and the many victims also gave their testimonies yet on the day the police, who had also charged Mr V’s son, arrested and produced the “wrong” person at the trial which meant that the witnesses could not confirm that the accused person “present at trial” had in fact committed the crimes.  This set of purposeful mistakes took another three years of attempted appeals before a retrial took place.  It took almost 7 years to have this case heard fully in a court of law and despite all the evidence produced the judge acquitted Mr V and his son of all 35 crimes.  Sadly the outcome of this trial is what happens in all trials of this nature.  No one protests, no one is outraged, no papers write newspaper articles about it.  It just goes away and the accused goes back to committing the same crimes over and over again.  The only remarkable aspect to this case is the sheer level of involvement IJM had in this case.  The IJM team visited the police 26 times, visited relevant government workers 53 times, and made 73 trips to the courthouse and met 79 times with 10 different prosecutors.  Yet the law enforcement agencies still failed these people.  Why?  Because Mariamma and her friends, and all the other poor people trapped in modern slavery, are poor.  They do not have money and therefore they don’t have influence.  To receive a fair hearing in India you need to have money, an education, to be from a “high caste” and you need to have influence and only money can buy influence.  Then the law will protect you but then its protecting the wrong person.  It isn’t protecting the vulnerable and the needy, it’s protecting the bad guy doing the bad stuff.  It is essentially protection racketeering and this is why poor people are misused and abused every single day, because they don’t have the means to protect themselves.

NB This story was taken from The Locust Effect by Gary Haugen with the permission of International Justice Mission.  To find out more about why violence in preventing poverty from becoming extinct read The Locust Effect and have your eyes opened to some of the worlds scariest atrocities. 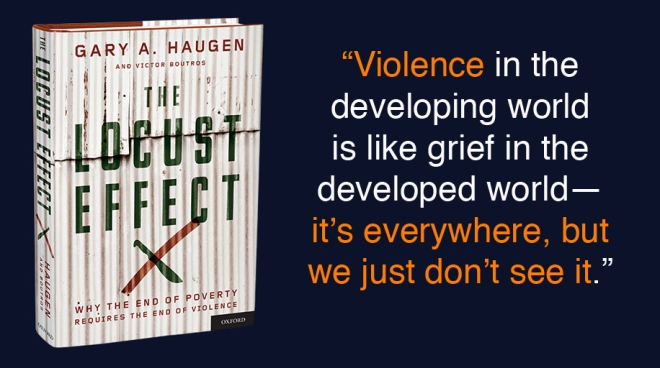